"Virginia Cuppaidge addresses one of the principle tenets of abstraction: the experience of nature is more than the eye can see - the cosmic realms and the microscopic world also can be realized through abstracted images." 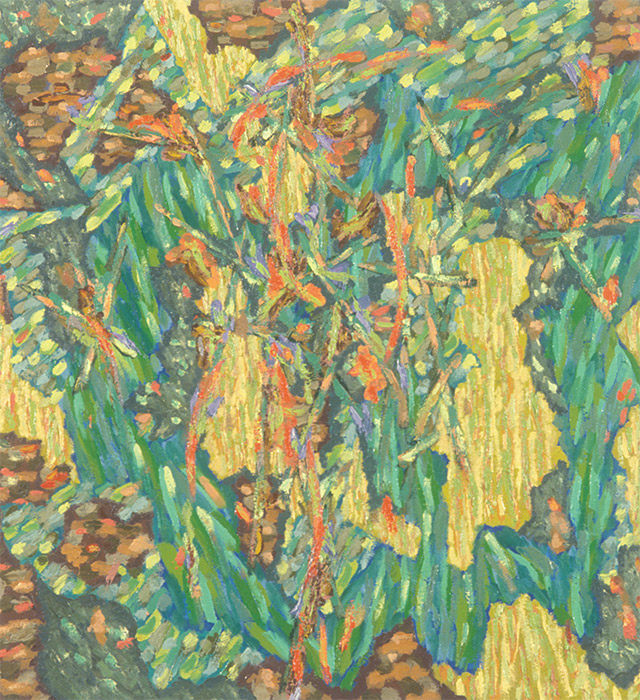 " Exuberantly and with a touch of native ingenuity, Virginia Cuppaidge plots an aesthetic course that is parallel with the most immediate and vibrant responses to cubist and fauve discoveries. Raised in Australia, Cuppaidge arrived in New York in 1969 to absorb early modern first hand. The spirit inspired her, and something she shares with her predecessors, including the Synchronists, Joseph Stella, Sonia Delaunay and John Marin, is an emotional approach to canvas as a color-structured exaltation of nature-as-cosmos continually approaching and swerving from the concrete." 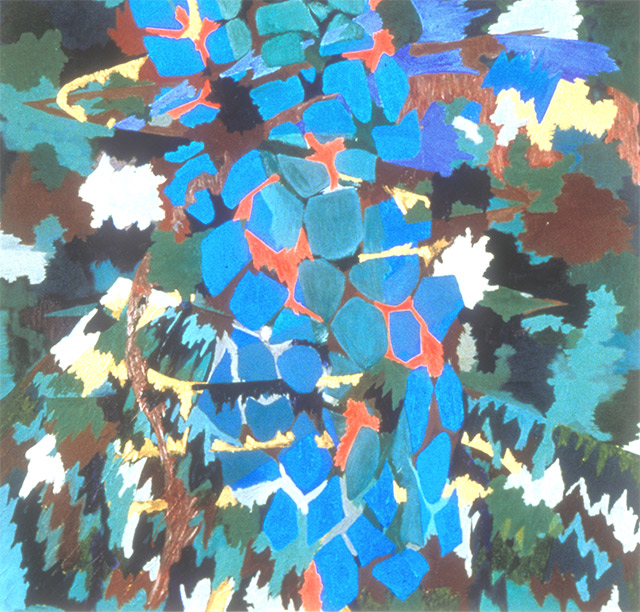 CLOUDS WITHIN THE MOUNTAIN

Clouds within the mountain. The title is a reference to the I-Ching which has been an important source of illumination for this artist. The painting with its many layers of acrylic and oil has assumed a great strength of composition in emphatic colors. Evocative of a lush landscape, it simultaneously elicits visual, aural, olfactory, and tactile sensations, producing an effect of synesthesia which involves all the senses of the viewer. 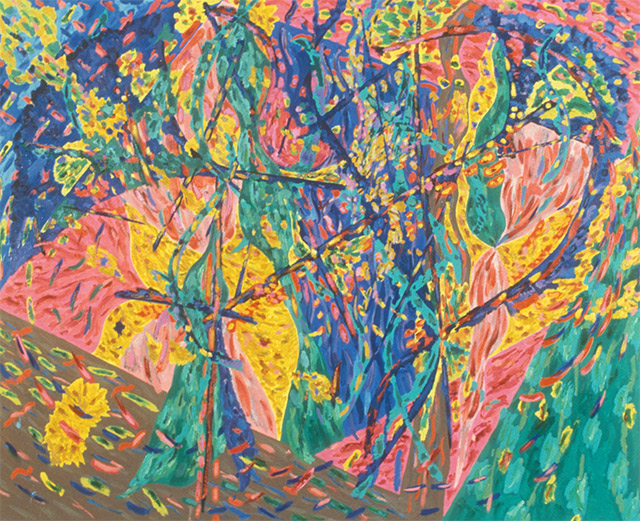 "When I traveled 14 of my paintings to four museums in Canada, including the Yukon it became very clear so far away from home that my work is directly from my Australian experience.

The Yukon felt to me like Australia, only in sub-zero weather (I was there in January). The light from the Artic gave the Yukon sky a pale mauve and pink pristine look, but even in its beauty it had a raw, primordial feel to it that I am really interested in tapping into.

The beginning of things … life in its most truthful state … even the sophisticated life that we live." 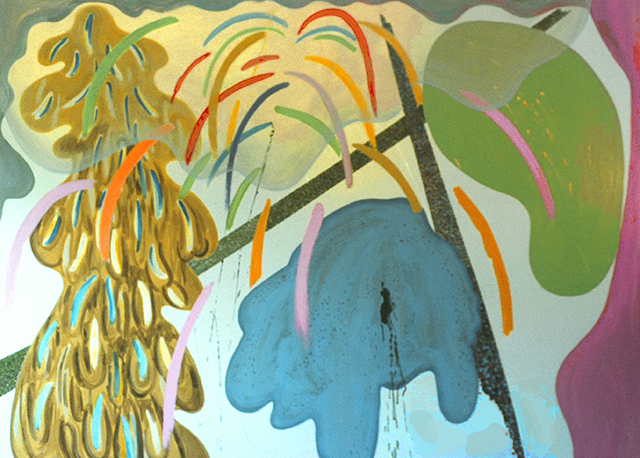 “Like the painter herself, Cuppaidge’s abstract works are positive and optimistic. The rich opulence of her large “LIFE WAVE” of acrylic and oil on canvas – releases an imprisoned splendor of floating colored forms out of eddying waves of translucent color and reined in by crossed lines of hard, bright metallic color. Here we have the painter’s central piece and prime work – an exuberant abstraction and yet allied to nature mood and place.”
Phyllis Woolcock – “Hot Summer in Manhattan”- Brisbane Courier Mail 1988 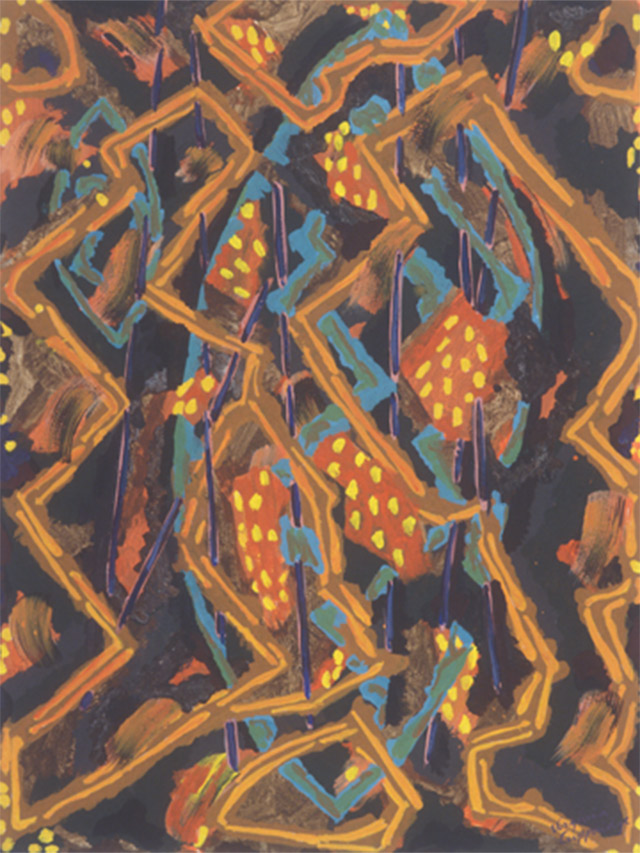 Light and Energy infuse the abstract canvases and works on paper of Virginia Cuppaidge an Australian born artist now exhibiting at The Stephen Rosenberg Gallery. 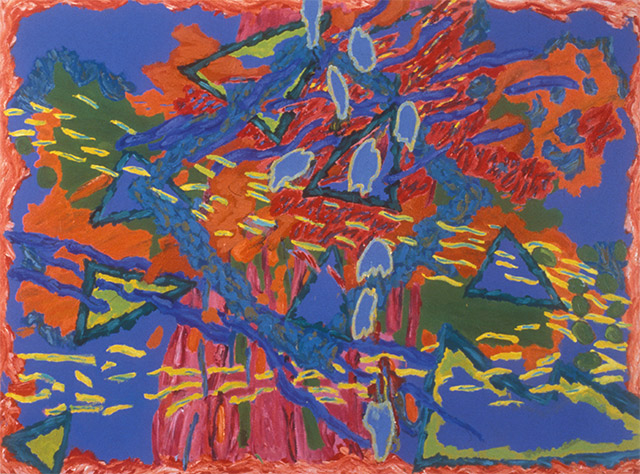 Galleries plus the jazz are one of the things she likes most about New York - she recalls seeing Thelonious Monk play in Sydney.

New York beckoned as the most alluring marriage of art and music. – It is only when she has finished a major work that she treats herself to a visit to one of SoHo’s jazz clubs, places like the Village Vanguard or Knitting Factory. Ultimately, for Cuppaidge, painting is about maintaining a receptive mind. 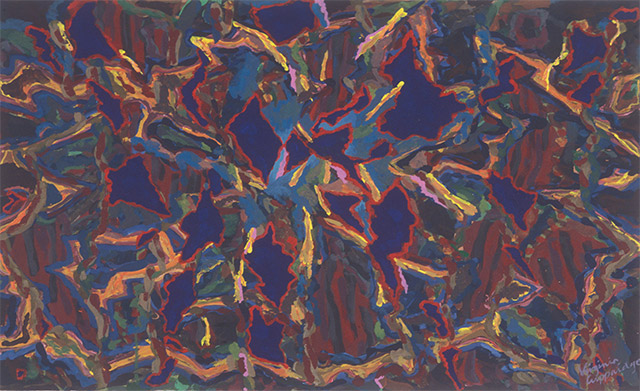 "The cosmos has always been a theme that has captured Cuppaidge’s imagination. In "Star Map", the binaries of dark and glowing, massive and miniscule unified and fragmented evoke the experience of a starry evening in a sky that never ends.

Cuppaidge need to be applauded for the rich and vibrant canvases and works on paper that never get stale. Her art brims with new ideas, and her energy abounds.

CENTER OF THE BEGINNING

The Center of The Beginning is a field of color 15 feet across in which a diffusion of hues flows across the canvas in a direction which moves upwards and toward the right. The bright palette of red, blue, orange, green and purple is held at the same values, yielding a sense of harmony and calm within the luminosity of the painting.

In certain places the straight lines delineate the color areas, but it is color which dominates the composition. The surface is organized in an all-over manner so that the forms at the outer edges hold the same visual weight as the central area.

Although non-objective, the painting evokes a sense of nature, of water and sky and tropical flora. Virginia Cuppaidge continues to explore the range of possibilities of an ideal and consummate correspondence between nature and painting. 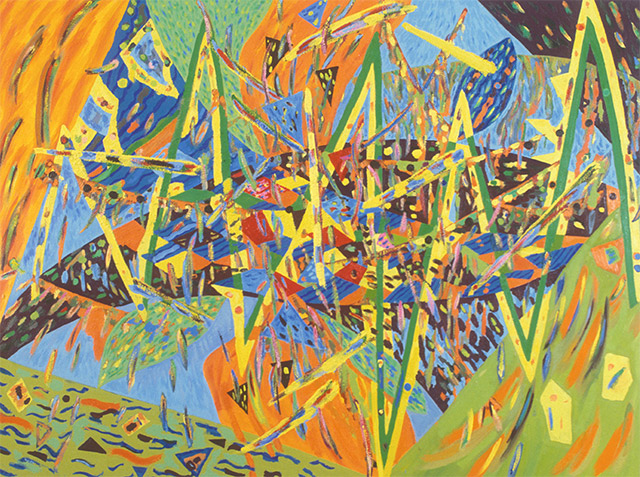 WHEN SHIPS COME IN

Since her arrival she has hardly left the city and describes herself as "the most provincial New Yorker" The museums, galleries, theaters, jazz clubs and her friends are enough. She shakes her head at recent talk that New York is fading as the center of international art.

"When I first got here, you have no idea how many people said, "Oh, you’ve come too late, it’s all happened. SoHo wasn’t even invented yet." 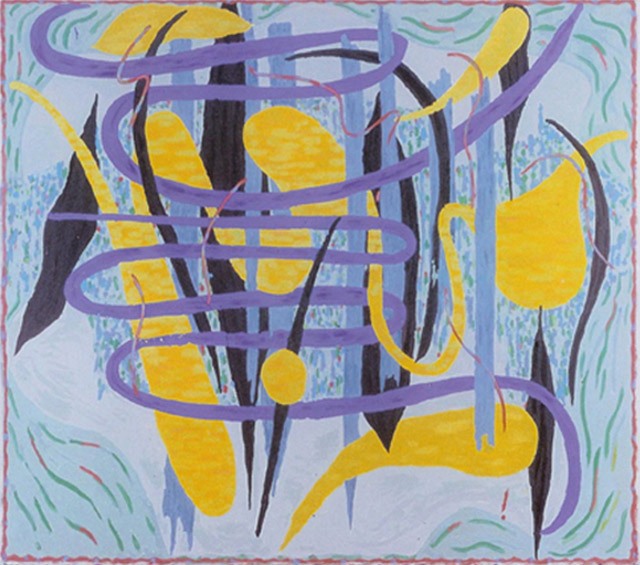 Looking back over Cuppaidge’s work, it would seem that although her paintings re non-representational, they are influenced primarily by her experience of the to countries in which she has lived: Australia and the United States.

For the past thirty-five years Brisbane-born Cuppaidge has lived in New York. Like several other expatriate artists of her generations she has maintained contact with Australia and exhibits regularly in both countries.

However unlike many of her fellow artists who in the 1960s left Australia to work in London, Cuppaidge had always wanted to go to New York because it seemed the most vibrant, international art community for someone who intended to paint large abstract works, and because she wanted to experience paintings by artists such as Kenneth Noland, Mark Rothko and Wilem De Kooning, which until then she had seen only in reproduction in Art International.